(No Booking or Credit Card Fees!) 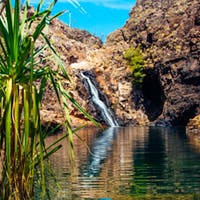 Darwin is best know for its laid-back blend of frontier outpost and modern city.

Darwin is capital of the Northern Territory and gateway to Kakadu National Park, Australia’s largest. It’s known as a laid-back blend of frontier outpost and modern city. At its heart is the Smith Street pedestrian mall, notable for shops selling Aboriginal art and crafts, South Sea pearls, opals and diamonds. The liveliest part of the waterfront is reachable from the Central Business District via the Esplanade or an elevated walkway.

(No Booking or Credit Card Fees!)